One night laying for "LINK"

Launching bridge on the A14 Motorway 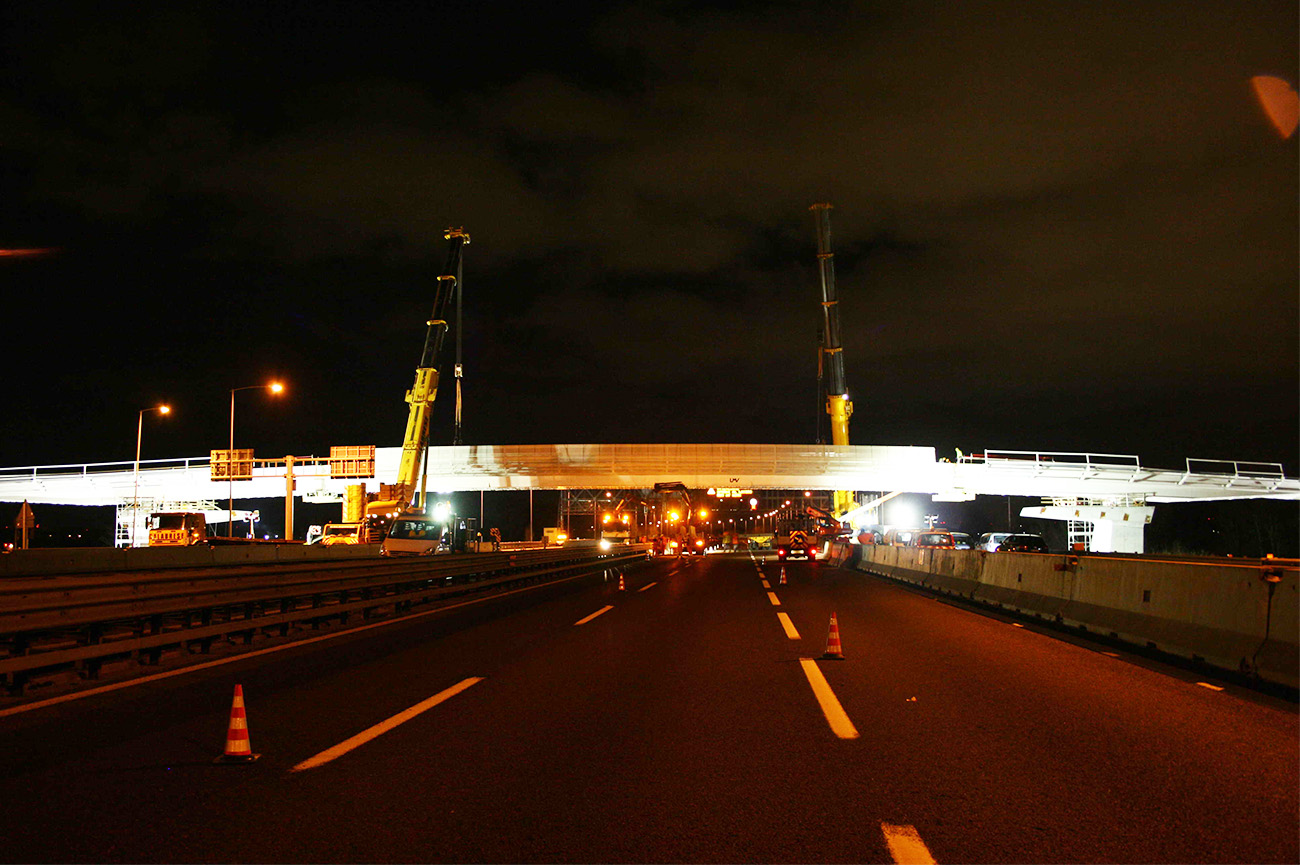 On the night of Saturday 4 March, the central span of the bridge was launched for the People Mover project, which will allow the elevated shuttle bus to cross the by-pass and the A14 motorway.
The bridge that will be called "Link", it’s a fundamental part of the route of almost 5 km that connects the airport with the urban train station. It weighs about 245 tons with 60 meter long span. The central span is the key closing of the A14 bridge along 160 m, consisting of two long lateral shoulders, each 50 meters long. The overall wheelbase of the span, from support to support is 95 m and the radius of altitude curvature is 1000 m. The bridge, dual-runway, prepared for a future doubling of the lane, was built and assembled in the LMV factory in Roverbella (Mantova).
From Friday 3 March, several teams have alternated after an intense preparatory work: 46 operators and 8 technicians were engaged, two 500 ton cranes, a 800 ton vehicle crane, 4 telescopic platforms, 2 telescoping trolleys, a four-wheel steering truck, 2 generators, 4 torque wrenches, 16 hydraulic jacks and 4 power stations.

Here is the chronicle of the operations of launching (see the Image Gallery in the projects-infrastructures area):

Friday 3 March was positioned on 2 truck with 6 motorized axes.
Saturday 4 March
6.00 a.m. Closing of the acceleration lane entering the by-pass; guardrail and road signs removal works.
8.00 a.m. 500 ton crane equipment.
9.00 a.m. Entrance into the acceleration lane of 2 biliary with ballasts and cranes of 500 ton, after entering the lane of the bridge on trucks.
8:15 p.m. Closing of the by-pass; slow lane closing and overtaking of the motorway. Entrance to the by-pass of the 2 cranes (a 800 ton crane truck on airport side and a 500 ton crane truck on Bologna side) for the positioning and equipment of the cranes, approaching of the bridge in the bypass.
22:20 p.m. Motorway closure, water drain filling and positioning of the sheets for the carriage passage on the airport side.
Sunday 5 March
00.15 a.m. Starting bridge’s erection
4.00 a.m. End erection and fixing of the hinges. Finally, disarmament of crane and restoration of the motorway.
All the operations were successfully concluded with 2 hours in advance of the program agreed with the company Autostrade Spa.